skip to main | skip to sidebar

Our newest members of the family

Meet Harry and Harriet. They have been coming by every now and then. It has been exclusively them for pretty much the last week! Yes I am talking about Hummingbirds!

We purchased the feeder at Lowes back in July. There has been off and on traffic for a little while now, it increased tremendously over the last two weeks. Over the weekend there seemed to be a little fight over whose feeder it actually was. My hubby took some great photos of the handsome couple.

Two items of note. I switched the nectar to homemade, with no red dye. Secondly that is basil and yes I know you are supposed to deflower it! Just hadn't gotten around to it and I am glad that I hadn't as Harry (I think) really enjoyed it. 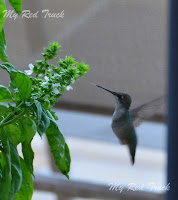 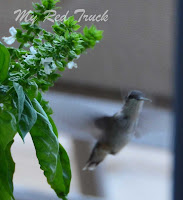 The kids and I have so enjoyed these birds. My four year old Emmett can actually distinguish between the male and female pretty accurately. We were both hanging out on the back porch and heard them flying around and chirping. It is breathtaking and a constant reminder of God's hand.

They must be getting used to use being around, when we approach the windows to look at them they are getting bolder by hanging around. Harry clearly was enamored by Emmett as he fluttered and hovered around the window as he was peering out watching him.

We are going to try and takes some more pictures of them close up. Hope you all enjoy!

On another note, my lovely hubby has graciously offered his unused office space to me So now I won't have to share my space with my two kids. As you can imagine I have been organizing and setting everything up eagerly! :-) Will post when I get it settled.

Posted by Vickie at 4:30 AM No comments:

Just not sure how to post this . . .so being blunt and to the point!

I pride myself (yes I know just saying this is asking God to give a lesson . .read on he does) in being in control. I have it together, there is nothing I can't tackle. No project I can't meet head on. Well that is until I put together the following mix:

Maggie is a wonderful puppy. She just did what puppies do nip, play, poop (in and out of the house), pea (in and out of the house), whine. Add that to my two kids and my health problems and by day 5 I was a wreck. It takes a tremendous amount to get me to the point I was at but she did it fully. Top it off my kids were terrified of the puppy. If they were around her either I had to be right beside them or they would perch themselves on the top of furniture and scream.

So after an emotional break down we decided to take Maggie back to the breeder. It was a very hard decision and not one done lightly. If you are judging me please show me some grace. I am so thankful for the lesson that I cannot do it all. That I need HIM with me and there are just some things I can't (gulp) do right now. I HATE saying I can't or no.

So I also apologize for not posting. Sometime we will own a dog. Maybe an older one, probably when my kids are older.

Link to my Store 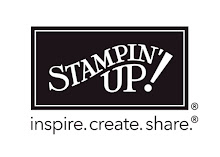 Vickie
Brentwood, TN, United States
In my imaginary Red truck I can haul all sorts of Things! I seem to have my hand in many cookie jars these days. This blog allows me to share my creations and life experiences as well as showcase some new endeavors. Come ride with me in my red truck, there is plenty of room!

Reap what you Sew!